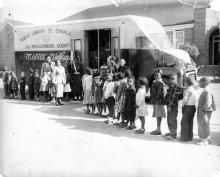 In 1966, the library's two bookmobiles were retired. The bookmobiles had provided flexible, popular service. But they could carry only limited collections and were becoming increasingly expensive to operate. The branches maintained the friendly, neighborhood atmosphere and had much more space available for children's and adults' programs, for students studying and completing homework assignments, and for more varied collections.

Library staff continued the tradition of playing a leadership role in the state and the region. Mr. Galvin and other staff members served as officers in state and national library associations and published articles on a variety of subjects for journals in the field. After thirty years of service to the library, Mr. Galvin stepped down to enter the library consulting business in 1971. He was succeeded by Arial Stephens, the assistant director.

From 1940 to 1970, the library had been quick to embrace new technologies. In checking out books and other materials, the library advanced over the years from inkpad to mechanical charger to an audio system to keysort cards and, finally, by the 1970s, to computers. The Library unveiled ALIS (Automated Library Information System) in the summer of 1980.

The conversion to computer had monopolized much of the administration's and staff's attention for several years. Suddenly it was obvious that Charlotte, in a decade of rapid growth, had left the library behind. The main library was now 25 years old and "a bit frayed at the edges" as one newspaper account described it. The collection filled the building to capacity and support services had been moved to leased quarters in Spirit Square next door. A renovation of the basement stack area had helped somewhat. But the area was not open to the public, and patrons were frustrated at their inability to browse among the books which were stored there. Only one new branch - Independence - had opened during the 1970s although a 1976 study had recommended six additional branches in unserved areas of the city.