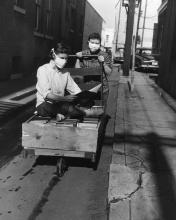 In the spring of 1954, the main library was moved into temporary quarters on College Street for the two years required to tear down in the Carnegie building and build the new facility. When it was opened to the public on November 19, 1956, it received national attention in architectural and library circles as state of the art in library design. A.G. Odell of Charlotte was the architect. Cost of the building and equipment came to $1.1 million.

With its sleek translucent marble and glass facade, the new main library was a sharp contrast to the columned, formal Carnegie building. The curving Tryon Street wall seemed to draw people off the street, and at night the glass wall made a bright showcase of the interior. There was a vast difference within the walls, also. Hoyt Galvin's goal for the library was that it become a university for the people. There was a new emphasis on building in-depth research collections to support this idea. The Library featured a growing collection of local and regional historical materials in the Carolina Room, which soon began to attract researchers from across the country. The Business Reference section expanded, and the library was designated a United States Government Documents Depository in 1962. The Library's collection grew to include films and filmstrips, records and slides, microfilm and artwork, as well as books and periodicals.

During the 1940s and 1950s, the library became involved in several publishing projects. The first issue of the Directory of Clubs and Organizations was produced in 1941. Book Club Program Suggestions (later published under the title Program Suggestions) appeared in 1944. The Film Catalog was first published in 1948, and Ideas for Government, a bimonthly bibliography aimed at local policy-makers, began in 1959. Also in 1959, the library commissioned a major historical study, Hornets' Nest: The Story of Charlotte and Mecklenburg County by LeGette Blythe and the library's retired assistant director, Charles Brockmann. The ambitious, 500-page project was published in 1961.

Five new branches were established in the 1960s: Derita Branch in 1960, Sharon Branch in 1963, Northwest Branch in 1964 and Tryon Mall Branch in 1968. Sixteen branches now served Charlotte neighborhoods and outlying towns. Sharon was the first branch to be opened in leased space and represented a new philosophy of neighborhood service. It could be moved in response to future population shifts, a real advantage in light of Charlotte's surging growth. The location of the Tryon Mall branch also reflected a changing view of branch service. Instead of building or leasing a free-standing facility the library board elected to place it in a busy suburban shopping center where people could park and find a variety of services.