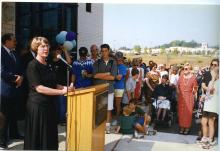 Building on the success of Morrison Regional, the library moved in 1991 to add a regional library in the northern end of the county, but the process did not proceed as smoothly. First, although a developer had offered 2.8 acres at Sam Furr Rd. and Statesville Rd for the library to build on, there were costs associated with preparing the site for construction. (Board of Trustees, August 27, 1991 and September 24, 1991).Charlotte Mecklenburg Library, Minutes of the Board of Trustees, August 27, 1991 and September 24, 1991

While that matter was pending, the citizens of north Mecklenburg were raising objections to the whole scheme. The plan had been to help fund the new regional by closing the town libraries of Davidson, Cornelius, and Huntersville.  Whitacre, 1991 Diane Whitacre, "Residents Fear Towns Can't Be Saved," Charlotte Observer, December 22, 1991, Mecklenburg Neighbors Section, p.1 This proposal aroused a storm of community opposition, and a comparison with the south Mecklenburg regionals suggests a reason why. When Morrison replaced the Sharon branch, and when South County replaced the Arboretum in 1998, the old branches had been short-lived institutions in leased retail space. They had not served generations of children from the heart of small, independent towns as the north Mecklenburg branches had done.

Residents in the towns considered the libraries part of their local identity, and did not see a larger library to which they would have to drive instead of walk as a sufficient compensation for the loss of the familiar community resources they had known. A public meeting in 1992 brought out this poignant statement of loyalty for the town library:

The outcry against closure had caused the library to propose keeping the town libraries open for limited hours and with reduced staff and sharing collections with the new regional. The mayors interviewed in Smith's 1992 article believed that such drastic cutbacks would inevitably lead to closure.

Ultimately, the North County Regional Library was built, but not until 1997. The town of Davidson got to keep its own library branch thanks to the helpful intervention of Davidson College. The college, town, and the library system worked out a deal in 1995 to sell the old branch and build a new one. (Charlotte Observer, September 27, 1995)”Focus on Davidson,” Charlotte Observer, September 27, 1995, p.2M The Cornelius and Huntersville branches closed when North County opened. After a three-year hiatus, Cornelius reopened with a new building thanks to a donation of land by the Kimbrough family and a fundraising campaign by the entire community.

Tags:
CML 1989-2015
Library of the Future
Regional Libraries
Building on the success of Morrison Regional, the library moved in 1991 to add a regional library in the northern end of the county, but the process did not proceed as smoothly. First, although a developer had offered 2." data-share-imageurl="">