Charlotte 1899: Eve of the New Century 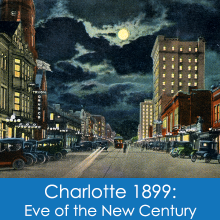 Dr. Chauncey Rakestraw will begin a residence on Elizabeth Ave. that will be an ornament to Charlotte's eastern suburbs. Dr. Rakestraw will have a suite of offices in his residence. The building will be of colonial style with large porches, tower and porte cochere. It will command a beautiful view of the city, and the house will be the gateway to Highland Park.