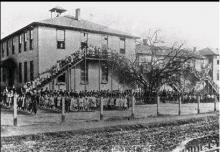 In the late 1940s, Myers Street School was the largest elementary school in North Carolina for black children. The school was torn down as part of urban renewal. The site is now part of Metro School and the Aquatic Center.

Charlotte's African-American teachers and principals have always strived to offer the best possible education for the communitys children. By the time the class of 1918 posed for their portrait, Myers Street School had already begun to expand, adding new curriculum, classrooms and a cafeteria.

Myers Street School teachers at the turn of the century.
Charlotte's graded schools were first organized in 1882, and Myers Street Graded School became the only school to educate the city's black children.

As more students came to Myers Street School, the building had to be expanded to accommodate them. Fire escapes were added to the outside of the wooden building, and the pattern of stairways gave the school a nickname: The Jacob’s Ladder School.

Out of Charlotte's African-American community came many leaders. Both William U. Harris and B. D. Roberts were noted educators and advocates for the importance of quality schools for black children.

A classroom at Myers Street School in 1969.
Although it grew to become the largest elementary school for black children in North Carolina, when the surrounding neighborhood was torn down during urban renewal, Myers Street School was demolished as well.