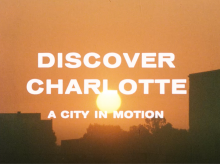 The film introduces Charlotte by describing the trucking and banking industries, emphasizing Charlotte's place as a hub for the exchange of information, goods, and money. It also gives glimpses inside the Observer workroom, a steel mill, a modernized textile mill, and other businesses. There are scenes of schools, colleges, churches, arts groups, and citizens in political gatherings. It includes aerial shots and shots taken from cars driving through neighborhoods, and shows scenes of the Easter service at Freedom Park (April 14, 1968). "Discover Charlotte" was filmed in the month that Martin Luther King, Jr., was assassinated. It shows scenes of integrated workplaces and classrooms, a discussion among police officers over how to build trust, and a glimpse of dilapidated neighborhoops while mentioning Charlotte's participation in the federal Model Cities program.

The entire 53-minute color film of life in Charlotte may be viewed at the website of the North Carolina Digital Heritage Center.